Travel days are always interesting…you never know! We were about an hour into the trip toward Asheville, NC. Our girls, Emma (Border) and Stella (Pug) had quieted down in back seat of the truck. Christine is playing games on her phone and I am enjoying some loud Eric Church Pandora with my earphones on. We are in the middle of South Carolina and I’m in the “nothing box” (more on that manly phenomenon later).

Christine suddenly taps my arm, so I glance at her and pull out my earphones to hear her message. “Brent, Daisy has died.”

Daisy ( beautiful Cocker Spaniel) was a part of the Christine household dog duo when we first met 10 years ago this coming December. She was the alpha and most palatable to me of the two critters that represented a part of Christine’s life I didn’t care for much. In fact, I told her I had to think about this relationship if they were going to be permanent.

Now before you form opinions…I’m not a dog hater. I just did not like dogs in the house and all that comes with it. i. e. Hair. Chris’ response? “Love me-love my dogs!”

I’ll go into the “falling in love with the dog stage” some other time. For now…She had Bob (pug) and Daisy. But understand for today’s purposes…I did fall in love: with Christine, Bob and Daisy.

We have faced the news of death and loss more than once on this Rv adventure. My beloved Dad, Cedric, passed on to eternal life last October 13. He was my rock and mentor and an example of incalculable value to me and many others. Our dear Bob left us a few weeks after that as we camped in the Ocala National Forest in Florida. He was 18 and our constant companion. My good friend and neighbor Jack died shortly after that after fighting a valiant battle with cancer. Now Daisy. 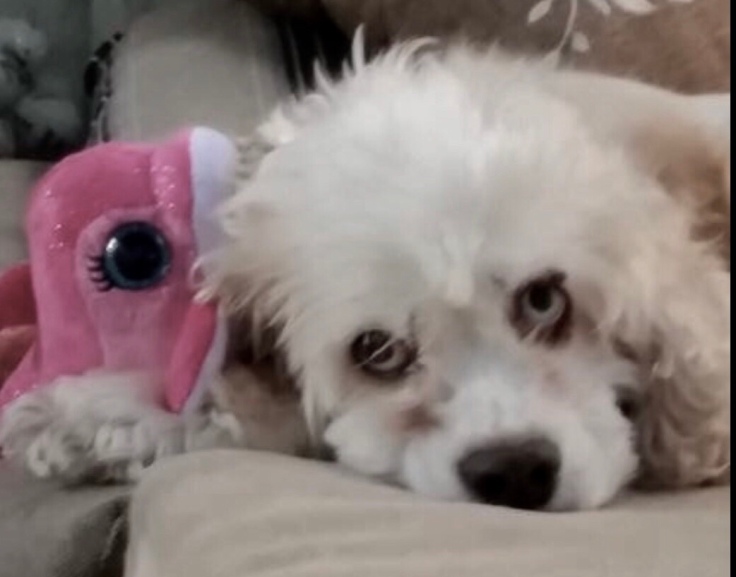 Daisy was one minute aloof and stand-off ish, the next, standing with her legs braced over the top of Bob or Stella ready to scold them or snap at them. She would choose when she needed love and attention from us, and when she did…she was all in.

I’m sure you’ll hear more Daisy stories later, but for now understand: she was part of the pack, but always longed to be “only baby.”

When we embarked on this adventure we are on, traveling this country…we had 4 dogs. Daisy was originally her ex husband Andy’s dog. When they divorced, they did not want to split up Daisy and Bob, so they stayed with Christine-and ultimately me.

So we approached Andy with idea of accepting Daisy (now 17) back into his life and take her to his home in North Carolina. He agreed and has proclaimed how much he has enjoyed having her and she was now: only dog! Off the clock! It wasn’t easy duty, for Daisy’s kidneys started to fail shortly thereafter.

Daisy was well-loved by her family and by our dear departed Bob. So when I heard she died, of course…I cried for several miles driving through North Carolina.

Long story…sorry. But life has losses. All kind and all levels of pain and sadness…I suppose even some losses are happy ones.

Saying goodbye for me has always been hard. Love lost is a particular type of pain. It is physical. It is mental. It is most assuredly emotional.

Grief is like a maze where you are suddenly plopped down into the middle stunned and blinded by sadness and darkness. In that sudden moment you just cry out in utter despair…unsure you’ll ever leave that place. In time, you begin to blindly stagger about feeling your way for a direction…and you hit many walls and you cry out more! It gets brighter and easier down one path then suddenly it gets dark and you hit another dead end. Grief is work and pain…and it is different for everybody.

As hard as it is…it shouldn’t be avoided. It is a mechanism of physical, psychological and emotional survival. It is a God-given and God shared (at the grave of Lazarus when Jesus saw his family and friends wailing at the stone, “Jesus wept.” Then He raised Lazarus from the dead, John 11). It is part and parcel of who we are and how we are made…in His image.

If you are in the maze or at the wall of grief…take YOUR time. Stand and move when you are ready. Jesus is weeping with you and knows your grief. Be present…in the moment.

A dear friend of mine has suggested I do a devotional. I thought about it and dismissed the idea. Then I turned 60 and thought: Why not?

But…I don’t want it to be a “traditional” devotional. I want it to be raw and transparent and relatable (made that one up…but you’ll see a lot of that activity).

Let me explain: some time back I visited a small rural Bible-believing church. Wonderful people and sincere ministry… no fault with that. But it was like a mail order schematic for Bible churches! Full of trite and overused sayings and phrases…none of which are used by the same people on every other day but Sunday. Sounds critical, I know…but it is tired church talk. I crave Christians who honestly express themselves and are fair in their self-assessment.

This is how my blog will read…transparent and real with biblical expressions that relate and reflect.

Clearly understand, though I am biblically trained and have some life experience, I am in no manner an expert or theological in all things. I am an ongoing seeker and follower- who strives to understand life and a successful walk with God!

I would prefer no judgment and and negativity. We may touch on politics, but only if it relates to life and biblical truth. Please, if you cannot be positive…don’t partake in the blog! It is that simple.

My wife Christine and I travel the country, so I will be sharing our experiences and pictures that illustrate them. The devotional will be anecdotal and hopefully inspire the reader to pause and be “present and in the moment” in their day-to-day experience with God.

Btw….please no grammar police! I don’t really care about that. Also, my perspective is conservative Christian-but respectful of all walks and choices my readers may be reflect. Love the sinner…because I’m one…saved by grace!

Hope you join me and dialogue your experiences…in the moment!

Thanks for joining me!

Start a Blog at WordPress.com.